Guess what?! The first episode of It’s Never Boring with Kayley Loring is now streaming everywhere!!! 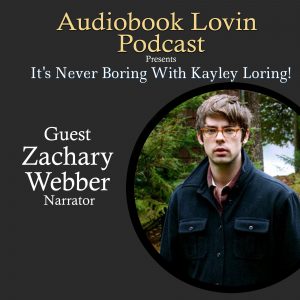 This is a special limited series within the Audiobook Lovin podcast and my first guest is narrator Zachary Webber (he also does a million other things, which we talked about). We talked for a couple of hours, so our chat has been divided up into two parts. Part one is a bit more like an actual interview but with a crazy lady cackling most of the time. PART TWO is more fun and games (available to stream April 13th) AND if you are an Audiobook Lovin’ Patreon supporter then you get to hear a bunch of hilarious bonus goodies and listen to the episodes a day earlier than everyone else!

I am so terribly fond of this Zach Webber person. He narrated the audiobook for TROUBLEMAKER. If you follow @webberesque on Instagram, you know that he spent last weekend (and most of this week, apparently) entertaining you with hilarious impressions in his stories—for free. This week, he’s recording the audiobook for FREED by EL James. (See what I did there?) In between those two major life events, he allowed me to subject him to my own particular brand of questioning about all kinds of things. He was very brave (not really!), so open, and so much fun.

Also, you might recognize the voice of the lady who did the super cool intro/outro for my series!